I am always looking for ways to make our history lessons a little more fun. Our history curriculum has a lot of projects for every chapter we cover along with a coloring page and map page. Some of our favorite projects were done with legos. We have built the Pyramids, the Great Wall of China, the Hanging Gardens of Babylon, an Assyrian siege tower, a zigarut, King Minos’ Palace (complete with Labyrinth and minotaur) and Stonehenge. Maybe we built a few other things…can’t really remember.

During a curriculum swap with a local homeschool association I managed to get a roman coin. The coin was covered with nearly 2000 years of dirt and muck. Since we are studying ancient times right now I thought it would be fun for us to clean up the coin and uncover our treasure. My oldest and I worked on the coin for a month! We did manage to get one side of it cleaned up but it was tedious and the sort of work that made your fingers sore. We scrubbed it with a toothbrush and then soaked it on olive oil for a day. Then we would use a pin and scrape at the dirt that has softened up a bit until our fingers hurt and then start all over again. After a month of this hard work I asked my husband to work on it for a while. He worked on it for about ten minutes and then decided there had to be a better way to uncover our little piece of history.

My husband built an electrolysis machine! Engineers are fascinating and being married to one is a never-ending adventure. He burned all the dirt off the coin in less than ten minutes!!! This method also destroys the patina…After admiring our shiny new ancient coin we spent the rest of the evening trying to figure out just what we had. Our coin was so worn that the lettering was impossible to read and we had to make rubbings of the coin to better identify the pictures. Turns out our little treasure is a bronze coin called the GLORIA EXERCITVS which is Latin for “glory of the army”. Turns out it is a very common coin from 330 to 337AD from the time of Constantine. Our coin may be common and of very poor quality but I find it fascinating and could not help but think about who may have held the coin and what they purchased with it.

I can’t wait to get another one and watch my husband zap the diry off of it!!! If only he could do that to my kitchen… 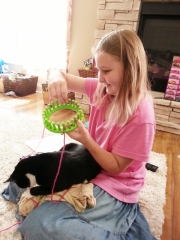 loom knitting a hat for her doll 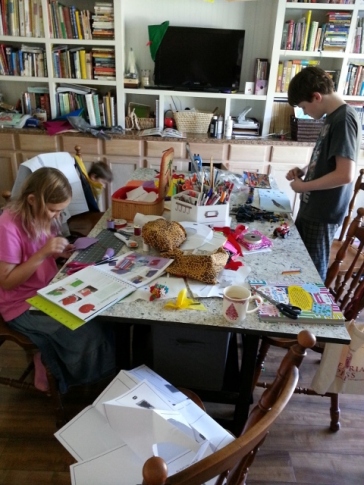 Sparkles made this needle case for me

I am not sure when the coin I have came from originally. But I did notice they can be purchased from Hands and Hearts. The packaging even looks the same. I have not ordered from this company before but I do plan to order some of their history kits in the future…and some more coins!

2 thoughts on “Uncovering History With Electricity”