Our science studies (Apologia’s Astronomy) took us to Venus and Earth this past month. We also managed to combine some history and art into our science labs this time…always nice when projects and disciplines can be combined!

Our first science project was to make a Venusian landscape in a box and then map it out with radar. Biggest and Sparkles really took to creating a landscape with hills, cliffs and a volcano. We then covered the box with grid paper and used a bamboo kabob stick to poke holes in the grid squares. To learn how radar works we then measured the distance from the bottom of the stick to the point where the stick touches the grid paper when it cannot be pushed further down. The crew measured every single grid square covering the box and were really excited when they found their cliff.

Our next project was to build a volcano. We were supposed to build a volcano when we studied the Minoan civilization in volume one of The Story of the World. But we never got around to putting the volcano together (some believe the Minoans were destroyed by a volcano). The instructions for building the volcano are in the Activity Guide for The Story of the World. (Turns out the Mars chapter in the Apologia Astronomy book has volcano instructions as well…I should read more than a chapter ahead…) We used air dry clay to build the volcano around a POM juice bottle. After drying a day the kids painted it…including Littlest who found all of the paints unattended! They were supposed to put the art supplies away while I made dinner. He had a blast painting the volcano and made the least mess. After the paint dried we blew the volcano with vinegar and baking soda! That particular combination is always a good time!

While waiting for the volcano paint to dry we worked on a volcano chalk pastel art project from Hodgepodge. The tutorial for the art project is available to those on her mailing list. The lesson is still (not sure how long) on her site in the sidebar if you subscribe to the blog. As a first time homeschooler I have turned to her blog many times and found much-needed advice and encouragement. In fact, her blog is often the first place I go for any questions or problems I am having. So far, I’ve always found a working solution there. Anyway, the instruction for the art was easy to follow and I was really happy with everyone’s finished project. Yeah!! Something nice to put in the portfolio!

We then moved on to our study of the planet earth. The best project for this chapter was making the rice-crispy-earth-layers treat. I had never made rice-crispies before…does that make me a bad mom? We used a red peanut butter M&M to be the outer and inner core of the planet. We then wrapped the candy with the cereal layer to represent the mantle. After these cooled a bit we dipped them in chocolate almond bark to represent the earth’s crust. Here is a tip for you just incase you have never made these cereal treats: wait for them to cool a bit before forming them into spheres. I had almost given up on making these until I decided to try one more time to get the cereal to stick together. Yummy!

The past couple of weeks in history we have been studying the life of Julius Caesar. The kids were having a hard time coming up with a Lego project to build for these chapters from SOTW. After studying about the many war campaigns he fought in the crew opted to make Roman swords. I didn’t think much of the idea at first but the swords turned out really nice.

Linking up with Apologia Blog: Homeschool Science Share and Tell 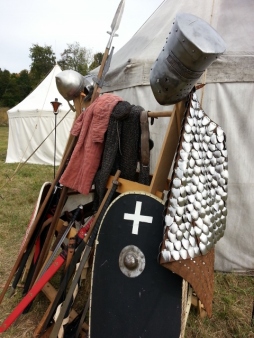