We finished up swimming lessons this week…didn’t we just start?! All of the kids made progress but Middle Boy really improved the most. He went from hugging the edge of the pool to swimming in the deep end over the past three weeks. The three of them also got individualized attention and instruction from Coach…a nice little perk since most kids their age were tucked away in government or private school. I feel  so much better about letting them swim at Mrs. Cuddle-me’s home this summer. If you are in the area I highly recommend the folks at Thunderbolt Aquatics.

Over the weekend we planted our little garden of tomatoes, peppers, summer squash, and cucumber. I’ve also got some bean seeds to plant with the kids. We didn’t do most of our botany experiments over the winter so we will get started one those soon with the beans. My husband thought it would be fun to plant the squash in a hollowed out tree stump. I think they look cute in the stump and pretty soon they will be surrounded by a yellow-orange sea of marigolds. I am looking forward to fresh squash and tomatoes this summer.

We also took the crew skating on Saturday. They had an absolute blast at the skating rink last weekend!! We were the only family at the skating rink and had the place to ourselves. Even though we were the only family present the folks at the rink still played the skating games with the kids and gave them prizes for winning!!! I thought that was really nice…they really didn’t have to do that for us. I think the kids enjoyed their own unexpected private skate session.

We are still working through our first Light Unit in math. The kids all like their new math curriculum. They have been plowing through two or three lessons a day for now. We’ll have to keep at this pace through the summer in order to reach grade level math by Christmas break. We finished the second volume of The Story of the World this week. They do so well with the oral narrations now that I am going to have them do written narrations next school year.  Only the middle two will continue on with The Story of the World studies. Oldest is moving on into the Logic stage next year and will begin studying Ancient history. A middle schooler!!! We are also nearly finished with Primary Early American History…only three weeks of work left in the guide. I have enjoyed (maybe more so) that study as much as the kids.

I am in the middle of planning for next school year now. I usually like setting goals and planning lessons but this year it feels like a wrestling match. Oldest will be putting more time into his studies and several of his subjects are now separate from the middle two. I’m a little sad that our group time will not be the same…we won’t all be working together as much. I am working…trying to anyway…more individualized time with each of my children this year. I feel the Lord is calling me to give each child their own time with me. I just wish He’d write it into my planner book for me ’cause I’ve yet to figure out how to make it so.

Linking up with Weird Unsocialized Homeschoolers

such a pretty flower 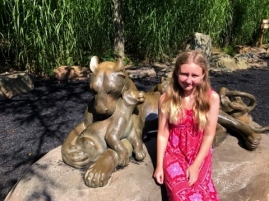