The final papers are written and all final exams are graded and portfolios filed. I can wrap this academic year up with a pretty bow and start prepping for next year which begins soon. The kids get a small break from formal schooling (learning never stops!) next week. We’ll continue with history, science, and math until we begin the next academic year on July 13th. I always like to ask my crew their thoughts on their education.

Just for fun I decided to make graphics out of the interviews. ( You may have to click on them to read though.) Everyone’s favorite subjects were from Beautiful Feet Books. Oldest had a hard time choosing between the three courses but 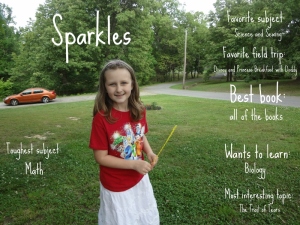 chose to settle on Ancient History. Sparkles loved The History of Science course and Middle Boy is still raving about Geography Through Literature that we finished up at the beginning of the academic the year. Oldest loves his history studies with Beautiful Feet Books so much that we have already started the medieval course. The rest of the crew is eagerly waiting for him to finish  so they can all begin a two-year study of American history with Beautiful Feet Books. We’ll use BFB’s Early American History and Modern American history for intermediate grades. By that time Littlest will be ready to start their Primary Early American History. Between the two studies we’ll

take a little time to study Kentucky history. We’ll also pick a few historical sites to visit during our two-year ( maybe two and a half?) study of American history. Oldest should finish up his medieval study sometime in January…possibly February.

The kids all agreed that math is their toughest subject. They like their math (from Christian Light Education) but it has not been an easy change over from MathUSee. They also tested a year behind when we switched curriculum. They all worked hard and completed a year and three-quarters work this school year. Sparkles is having the hardest time with math. My husband suggested that she may need a different 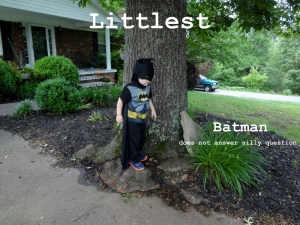 curriculum. At this point I am considering Teaching Texbooks but still researching. If you have a suggestion for a curriculum that is great for the non-mathy, head-in-the-clouds, artistic type of girl then I am all ears!

I was saddened that Sparkles could not think of any accomplishment to be proud of. She is feeling a little defeated these days. Mood swings, puberty, the need for more sleep, and fractions do not mix well in her head! Oldest is also going through some changes of his own but so far nothing that a stick of deodorant won’t fix…and two showers a day. Middle Boy is still working a year ahead academically (which hasn’t helped Sparkles’ self-confidence one bit). His main challenge is just staying focused long enough to get his work done and keeping a good attitude.

I think I say this every year but the best thing I did for my kids’ education (other than homeschooling) is daily music practice and weekly lessons with their instructors. There is so much more to music instruction than playing an instrument. Music involves daily commitment, study and builds character. Learning the language of music is challenging and through their struggle to understand they are also learning valuable life lessons. So thank you to my crews’ music teachers.