Sunday Journal: Strike That, Reverse It…

Remember last week when I said we were moving to northern Kentucky?! Well, never mind that. We’re going to Frankfort now (our state capitol for those who do not know). I’m excited to move there and in all honesty ready for this moving business to be over with. I think there will be many, many exciting opportunities for a homeschooling family to get involved with in the area.  I’ve already reached out to a couple of homeschooling groups in the city and nearby county.

As a military kid I grew up kinda like an urban nomad. We never stayed anywhere for long. I’ve never felt an attachment to a place. Or so I thought anyway. I am so excited to move back to central Kentucky. I met and married my husband in the region. The first place I ever thought of

as “home” was when I moved into my husband’s house all those years ago. There is a vast difference between a house and a home.  My enthusiasm for this move took me by surprise. After mulling over these feelings I realized that in my heart I feel like I am returning home. For me this is a new feeling and a strange revelation. I’m going home…feels weird and exciting.

Before we leave the western end of the state we’re going to be doing a few things “for the last time” all while getting the house ready for the market. This week we went to Nashville so the boys could spend their Lego gift cards they received during Lego Camp a couple of months ago. We also went to Centennial Park in Nashville to visit the Parthenon. I’ve now seen a 41 foot golden state of Athena! The Parthenon also houses an art museum and a history of the park. We’ve been intending to visit since Oldest studied ancient history. We didn’t explore the entire park but did see an obelisk, train, and a fighter jet on the grounds as well.

This week we also enjoyed a last breakfast at Hutchen’s BBQ. We’ve gone there to celebrate each new school year since we started homeschooling. Yesterday we went to Mayfield for the Top Gun Cruise-in. I felt a bit sad as I just love hanging out at the town square and looking at all the classic cars. I always pick a favorite car each time and imagine what it would be like to ride…never drive…just cruising in the passenger seat next to my husband. We’re hoping to go to the drive-in movies one more time and the skating rink too. Maybe one more walk at Kentucky Dam or drive around Land Between the Lakes.

We did manage to cram a bit of schooling in this week. I’m very disappointed in the Sonlight science we chose for this year. I thought the literature would be a bit more…”living” for lack of a better word. We are so spoiled with the quality of books we’ve used through Beautiful Feet Books that anything lacking the same quality is a bit disappointing. The good thing about this Sonlight science (core F, human anatomy) is we can bang out and entire week of study in about an hour…after tossing all the repeated busywork. So we are going to finish up this science curriculum during the moving period. I’m pretty sure we are going to use Dr. Jay Wile’s new elementary science series and Oldest will just move on to middle school science. For math the crew is taking a break from their regular curriculum and working on shoring up their math facts. I need to have them work on their facts twice a day so far we only get it in during the mornings. We’re only putting in half days of school at the moment but they are cramming with “life lessons” for now. 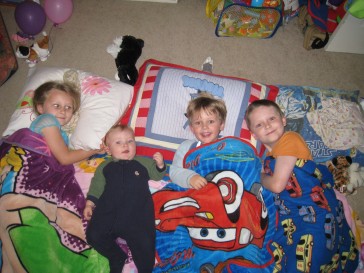 working in their journals 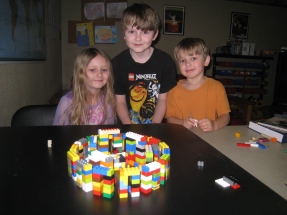 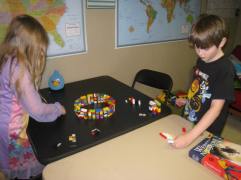 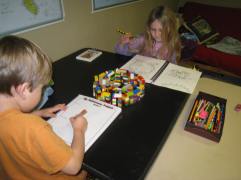 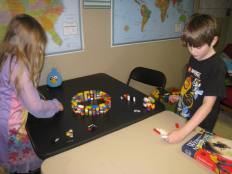 they put an archaeologist in the circle

6 thoughts on “Sunday Journal: Strike That, Reverse It…”