My mother’s weekend visit dragged on till Thursday. I thought she might hang out with the kids while I unpacked. But it didn’t work out that way. Instead of playing and visiting with her grandchildren she kept trying to unpack boxes…that would be okay if she lived here but she does not! I found my self constantly asking her to leave things alone and just enjoy visiting. I had to quit working on the house so she would not feel obligated to help. So, now I am five days behind and feel a little rushed to “get caught up”. I’m not sure why really or who I am trying to catch-up with either.

The visit was rough on the kids. Littlest just wanted his grandmother to play with him and threw

a fit every time she ignored him. He threw several fits. Oldest had the opposite problem. She kept helping him with his chores, rearranging his room (’cause I did a really bad job you know), hugging him, and bragging on him. He was so uncomfortable with all of her excessive attention that he begged me for a long school assignment. I knew he had to research William the Conqueror and the Battle of Hastings so I assigned him all of the research and a written essay in one day.  Later, he handed over some money she had given him because he “is the special one.” Oldest is so fair-minded that he hates the extra attention and secret gifts. I wish she could see that she is driving him away.

During her stay she decided to share some recent discoveries about our family history. One of her cousins is into genealogy and had learned that one of our ancestors was an African

American (or a man of mixed heritage…no one is sure yet) named Thomas Jordan. She broke the “news” to me really gently because she thought I was going to completely freak out. To be honest I was angry at her for thinking I might have some identity crisis or racial issues. But I didn’t tell her that. All I said is that explains her really freaky hair.

Anyway, hats off to Mr. Jordan for breaking the social norms of his day and marrying the girl of his dreams!

On Friday the kids and I explored a bit of downtown Frankfort. We found the library and walked around the area a bit. Nearly every building had a historical marker in front. We also walked over to the Methodist church we plan to attend and ended up getting a tour of the grounds. The church is very beautiful and has a history of 225 years in Frankfort. History is everywhere here! We also went to a local park with an archery range and walking trail and then explored the river just down the hill from our home.

We worked a little on the house this weekend too. My husband put up shelves in the schoolroom which I promptly filled with books. Homeschoolers never have enough book shelves!!! I seriously need to cull a few more books from the collection…

My order of soap nuts came in this week. I’ve already done one load of laundry and was very happy with the results. I’m going to use them for about a month or so before doing a post about them. I learned about them from Claire at angelicscaliwags.

Due to the move our oldest two didn’t really get to celebrate their birthdays. We made their cakes this weekend and my husband grilled them some special steaks for dinner tonight. Sparkles requested kitty cat cupcakes for her 10th birthday and Oldest just said to “surprise him.” I offered to buy cakes for them on their birthdays but they both wanted to wait until after the move so my husband and I could make their cakes for them. AS usual I made the cakes but my husband did all of the decorating. Next week we’ll have more cake because Littlest will be turning five!!! 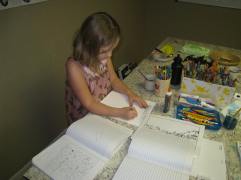