The first week of November flew by in a whirlwind of activity. We spent a couple of afternoons in downtown Frankfort enjoying the local Candlelight Tradition, the town’s kickoff of the Holiday Season. I must admit I had a hard time feeling the Christmas spirit since the weather was a bit warm and…well it is the first week of November. Just too early for all things Christmas…especially the music. For me, anyway.

Thursday evening we walked around downtown visiting many of the local shops. The area is filled with artisan shops and I came away with plenty of ideas for field trips. Free suppers, snacks and sweets were everywhere. Local musicians and choirs played on street corners and at the Old Capital building. We also stopped to visit with some visiting exiled Tibetan Monks. We watched them

work on a mandala for world peace. Sparkles also found a little coin purse in their shop she wanted. The bookshop I’ve been longing to visit was open so Sparkles and I nosed around for a while. I can’t go to a book store and leave empty-handed! I bought a book on the literary history of Kentucky. I’m hoping it will inspire me to cobble together a Kentucky history for the crew. I had a text-book given to me on the subject but it was so awful I sent it to the recycling center. It should have been burned it was so awful!

On Saturday my husband’s lovely friend (Lady C) and her mother spent the day with us. We hadn’t seen them in ages and enjoyed their company. The kids have already started asking when they are coming back. Littlest is just smitten! My husband grilled and Lady C brought her famous peanut butter kiss cookies. Yum!

Today we went downtown again to the Grand Theatre to watch The Polar Express. This was also Littlest’s first time in a movie theatre and Middle Boy’s second visit to one. I think the last time I was in a theatre was to see the first Iron Man movie. Most people wore their pajamas for the event but since we were going over after church and lunch we thought it best to wear normal clothing. Besides, since we homeschool it can be a novelty not to wear pajamas! Once the movie finished Santa Clause arrived. Littlest was so excited and just couldn’t

believe his eyes! He told me, “That’s something you don’t see everyday!” All of the children were given a bell. Oldest and Sparkles waited on a bench while Middle Boy and Littlest visited with Santa. Littlest was so bashful when his moment came. I couldn’t choose which picture to share so the rest are in the gallery below. I’m not sure if Middle Boy still believes in Santa or not. I generally do not ask and wait for the children to initiate discussion. Once the discussion takes place they are sworn to protect the mystery of Santa and seek ways to bring the secret joy to their siblings.

During our explorations around town today we learned Frankfort and Franklin County were named in honor of Benjamin Franklin. I didn’t know that little fact.

School went well this week. We started art appreciation and will be studying American artists. We’ll spend a couple of weeks studying a print and will do a monthly freewrite on the art piece. This month we are studying Indian Farmer by Oscar Berninghaus. I plan to alternate monthly having them engage in freewriting and poetry with a piece of art. This coming week we are looking forward to a little unit study on the Appalachian Trail.

Linking up with: Weird Unsocialized Homeschoolers and Parent Teacher Meet-up 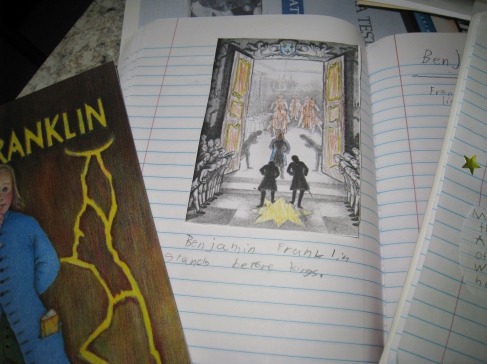 our Art in History kits arrived this week 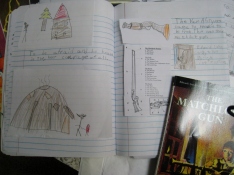 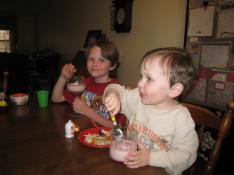 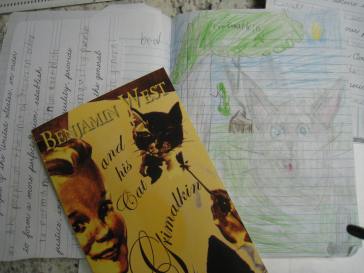