We prefer a literature and project based approach to history. I could not find a curriculum that meets our needs so I’ll be putting together my own. Over the next few months or so I will be updating this page with the books and projects we used to discover the history of our state.

Our history curriculum does not have an extensive study of the Native American civilizations of North, Central and South America. I want my children to have an appreciation for these cultures and to realize that this continent was not empty and ripe for the taking as I was taught in school. Therefore the introductory lessons are a rather broad overview.

Introduction to the Americas 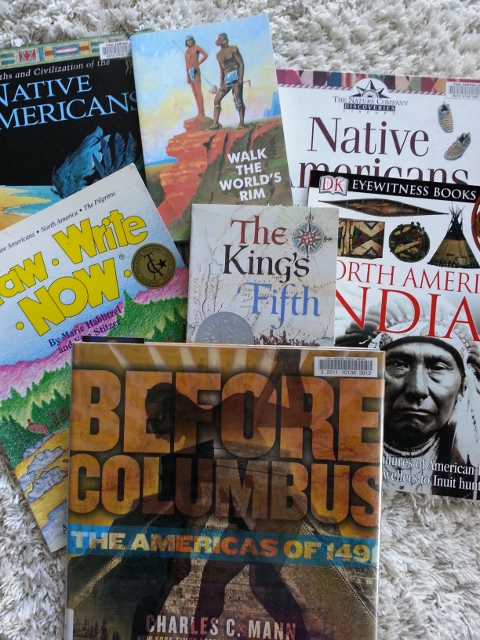 Primary Text:  Before Columbus: The Americas of 1491 by Charles C. Mann. This book is beautiful and is a young readers (3rd- 6th grade) version of his more scholarly work 1491: New Revelations of the Americas Before Columbus.

The book explores three questions. “How Old was the New World?”, “Why Did Europe Succeed?” and “Were the Americas really a Wilderness?” Discuss each question after the reading.

What is the milpa system of agriculture and how does it differ from the single crop system? Record in composition book.

How might the world be different today if much of Native American history, religions, stories, philosophies and cultural beliefs were not lost?

Other books: Myths and Civilization of the Native Americans by Marion Wood. The Nature Company Discoveries Library: Native Americans editors Dr. David Thomas and Lorann Pendleton. DK Eyewitness Books North American Indians by David Murdoch. These are encyclopedia type books with lots of pictures. The kids spent some time reading through these on their own. I did read the myths aloud. Draw Right Now Book 3 by Marie Hablitzel and Kim Stitzer. I let the kids use this book for art inspiration for their composition books.

Literature Connection: Walk the World’s Rim by Betty Baker and The King’s Fifth by Scott O’Dell.

Discussion and assignments for Walk the World’s Rim. This book is based on a true story.

Design a book jacket with cover (artwork, title, author etc), front inside flap (short summary), back inside flap (biography of author) and back cover (review the book, include a quote from the book).

Draw a map of the route in composition book.

Draw and color the legendary City of Gold in composition book.

Over the course of the story Chakoh makes a journey into maturity. He is very idealistic at the beginning. How does his point of view change from a child’s to one of maturity? At the end of the story why is Chakoh sad. What was his vision? How did he choose to honor the spirit of Esteban?

Discussion questions and assignments for The King’s Fifth.

Use a Venn diagram to compare and contrast the beliefs and values of Esteban and Mendoza.

How do Esteban’s beliefs and values change?

Describe the people of Cloud City and how their religious beliefs affect their life.

What happens to the relationship between Fr. Francisco and Esteban? Why did Zia leave and travel alone? Why do you believe she is the only character that survives with both her life and freedom? What was her personal reason for the journey?

Documentaries: I found both of these on YouTube: Lost Kingdoms of South America from the BBC (4 episodes) and America Before Columbus from National Geographic (3 parts).

One thought on “Kentucky History”