Sunday Journal: A Roll Pin, a Ride and a Birthday

Sometimes this past week seemed really long yet the days flew by in a blur. Two occurrences made the days pass slowly. My husband had meetings most of the week that kept him from spending his lunch hour with us. I felt a bit lonely without him and forgot to eat lunch a couple of times. Sparkles also had a really bad week with her uc pains, which exhaust her. She went back to bed several days and slept this week. She recovered a bit by Friday and was able to enjoy a mostly pain free weekend.

On Thursday I managed to run over a roll pin and end up with a flat tire. Fortunately, I managed

to pick up the pin near our home. At least I wasn’t stranded anywhere. Oldest learned how to operate a jack and change a tire (life skills lesson, yay!!! ). Luckily, the tire did not need replacing and only required a simple plug to keep on rolling.

Littlest turned six on Friday! My husband only worked a half day so he could spend the rest of the day with the birthday boy. Sparkles baked his cake and my husband did the decorating. This year Littlest wanted a Pikachu cake. I have no idea what a Pikachu may possibly be or if I am even spelling it correctly. All I can say is it is a cute little yellow critter. Littlest was delighted with his cake and presents. The older three spent the rest of the evening helping him build marble runs. Sparkles even gave him twenty dollars of her own money. She told me she felt bad that she didn’t feel well enough this week to make him a card. She can be a total sweetheart to her brothers at times.

On Saturday morning we took everyone to Best Donuts for a treat and then went down to the Mennonite grocery shop. Sometimes the deals are nice but not always. We do like to get our cheese from them because we can buy it in full size blocks and save money. Amish and Mennonite cheese is often better than anything available in the local grocery store anyway.

Later, my husband took me out for a ride in his sweet Mustang. I rarely get to ride in the classic so the afternoon ride was a real treat for me. We drove through Scott county, Switzer and Stamping Ground before returning home. I practiced taking pictures from a moving vehicle and asked questions about the engine and

exhaust sounds. The Bluegrass Region is beautiful and I was delighted to ride shotgun and gaze at the rural landscape…to me that is about as perfectly romantic as a moment can get. Just us, cruzin’ on a country road.

We took the younger three to some trunk-or-treats over the weekend. Oldest stayed home and watched episodes of Sherlock. We decided he was old enough to start watching certain shows and movies. He and my husband have been watching some classic horror films together lately. They watched Nosferatu and several of the classic Frankenstein movies before watching Young Frankenstein together. I watched some of those with them but when they opted for Jaws and Christine I found something else to do. Oldest now wants to read Jaws and Christine so I told them he could when he finishes The Three Musketeers.

We were tired by Sunday morning and opted to sleep in and continue looking for a church community next week.

I spent the weekend experimenting with some bourbon ball recipes. I can make  the old fashioned recipe just fine but am trying to make a buttercream version now. The first batch I made did not have enough boozy goodness so I modified a second batch. I am hoping these will turn out better. I also started a new knitting project today. I plan to make a mesh shawl with a beaded fringe and maybe a matching floppy hat. I’ve only completed about ten inches so far…another fifty or so to go.

The book I am reading this week is pretty good, Dinner with Buddha by Roland Merullo. I love the road-trip genre anyway. But this story is about a retired (forced to retire from the writing industry) North Dakota boy from a successful New York City

career, traveling the West with his brother-in-law, a Russian-Tibetan Monk, just sounded so intriguing to me. I’m not a Buddhist, nor about to become one but the insights the writer provides are fascinating. I identify a bit with the main character in his attempt to make sense of spiritual matters, daily life and reconciling our place in the bigger picture of the sufferings of humanity.

Homeschooling chugged along nicely this week. Littlest wrote his first words in cursive and passed his first spelling words. In history he is still working through his first book but I plan to take his first notebooking experience nice and slow keeping it fun and light. Oldest sat at the computer with him this week and helped him navigate around Clever Dragons (an education computer game that goes through 8th grade). Pretty

soon he will be able to sign himself in, use a mouse and keyboard all by himself and start learning to use the computer.

Middle Boy is at that stage where he tries to see what he can get away with. He tried to skip some of his writing assignments this week. I guess he thought I wouldn’t notice so he spent part of his free time on Sunday finishing his work. Oldest and Sparkles did the same thing when they were nine so I wasn’t surprised at all.

Sparkles managed to get most of her work done despite her illness. She likes to get up early and get her school work out of the way. This week I am encouraging her to just sleep in and let her body heal. Healing matters more than long division.

Oldest pulled excellent marks on his exams this week so I told him he could get his work done as he pleased for the week. The memory work for last month was the poem Invictus by William Ernest Henley. Littlest even started reciting it with us by the end of the month. The older three recited the poem perfectly. November’s poem is Death, Be not Proud by John Donne. The kids do not care what poems I choose in the future for them to memorize so long as it is not by Shakespeare.

linking up with Weird Unsocialized Homeschoolers

the week in read-alouds 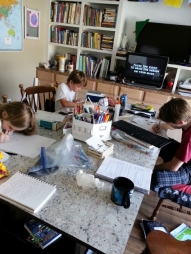 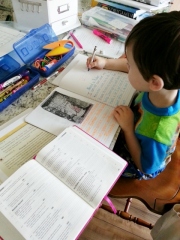 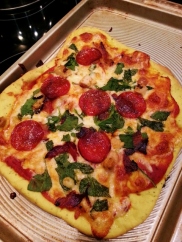 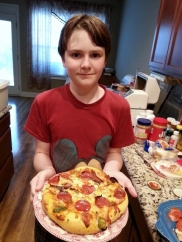 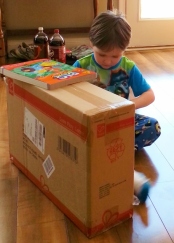 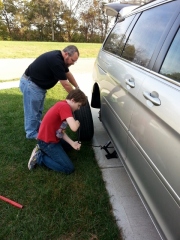 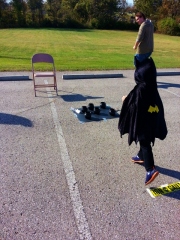 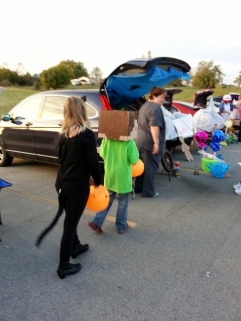 Sparkles out with Daddy

3 thoughts on “Sunday Journal: A Roll Pin, a Ride and a Birthday”