Last night my sweetie and I went out together. He had some shopping to do and I just needed to get dishwasher detergent and salt water taffy. I forgot the detergent but did remember the taffy…my ability to focus lately is distracted. Right now I am so focused on planning for the next school year that I forget to plan dinner and other life necessities. My oldest is going into eighth grade. Next year is high school!!! I’ve got so much to figure out this year to be prepared for the high school years. If I think too much about it I start to freak…so let’s move on. 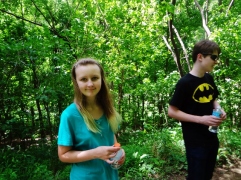 Boots and little bird. Not sure why they are hanging out together! 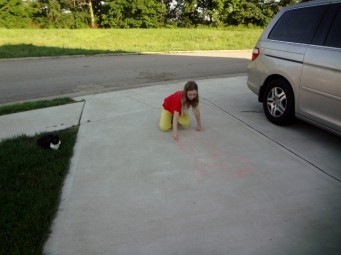 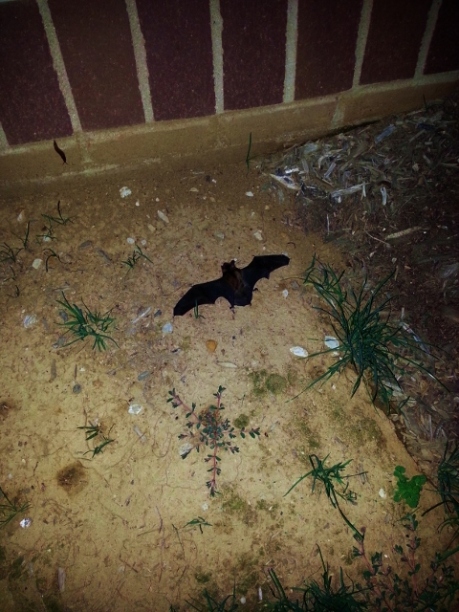 The bat that flew into the house…guess the bat radar wasn’t working. It flew away after a little while. 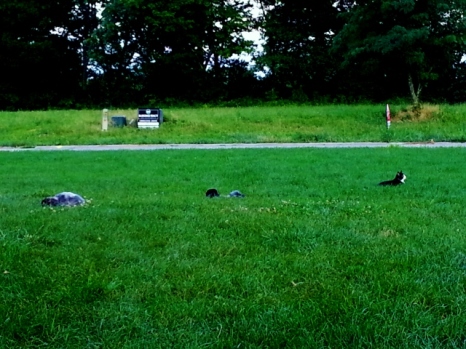 Boots and the bunnies

Middle Boy got stuck in the bucket and all I did was take his picture!!! So much for Mom of the Year awards…

Boots lays on her back and swats at the birds that try to chase her away. So fun to watch.

the temperature blanket at six months 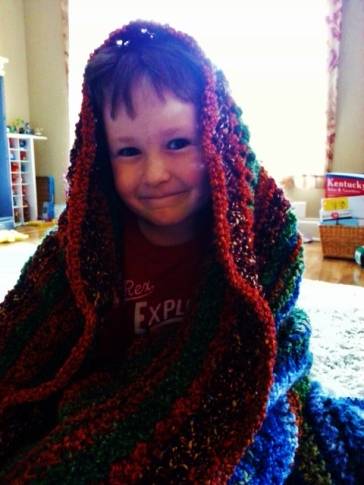 Last time I posted I mentioned that something was up with my brother. My brother abandoned his fiancée and disappeared with our dad.  I understand why he abandoned his lady. He is still

married to his first wife and I am sure he did not want to explain all of that to his fiancée. But running off with Dad?!?! That is insane and beyond my understanding. As much as our father abused me, I always thought the abuse my brother went through was much worse. My mom is a total wreck. She called me several times all sad and crying. She always told me I should forgive my brother and make peace with him. I quit being angry with my brother years ago and I’ve always hoped he would find peace. But I cannot have an abusive alcoholic near my kids. Not gonna happen! So, when all of this went down I could have said, “I told you so!”. I chose to just listen and be sympathetic to my mother who has just realized that her son is lost to her. She is being forced to see him for who he is and she hurts. I chose to just listen (though my husband heard an earful!!!) and let her know that I love her. She is hurting enough…no reason to rub salt in her wounds. She’ll be here all next week and hopefully a visit with the grand-kids will ease her hurt a bit..

e celebrated the end of another homeschool year. Sparkles spent the last day of elementary school in bed. Her disease has kept her in bed and feeling miserable for the past few months. Her doctor decided we needed to see a dietitian. I was a skeptic. I felt like the appointment would be a wast of time and money but decided to give the idea a go anyway. We drove to Louisville in the pouring rain and ended up slightly late because of the weather and driving conditions. My anxiety was running very high and at times my heart pounded so loudly that I could hardly hear (I detest driving in the rain and on the interstate). The dietitian spent two hours with us and we left with a nutrition and supplement plan. After just one day on her new diet and supplements she felt much better. She is full of energy and does not have nearly as much pain. She even got sore from spending a day playing in the sunshine!!! I am so happy to see her behaving like a little girl again. I will never doubt the power of nutrition! Her diet is limited for now but she says it is worth it to feel better. She can have two smoothies a day, a snack and one meal. I usually make her a special dinner but sometimes I can work her needs into my usual cooking. We have our sparkly girl back!!! 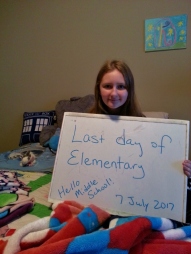 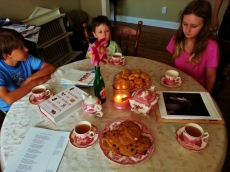 Last month we visited with my Sisters. I always appreciate the opportunity to spend time with them and catch up with everything at the monastery. I always leave more informed on world events which seems unusual for women living in a cloistered monastery. They have their finger on the pulse of the world. Mother also gave me a wonderful book on manners to read with Sparkles this year for her Beautiful Girlhood course I am putting together for her. The nuns spoil the kids with little treats every time. Something about those ladies and that monastery just drains my anxiety away for a few days. We were supposed to go to the zoo the same day but the bridge into Cincinnati is being worked on and traffic was seriously stalled. We’ll have to go again later this summer but at least we’ll know to find an alternate route this time. We stopped for ice cream on the way home…not the same as a trip to the zoo but the kids didn’t complain. 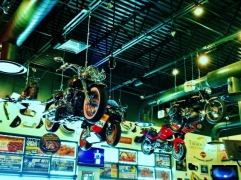 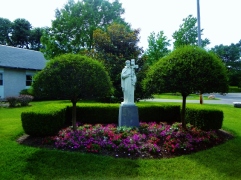 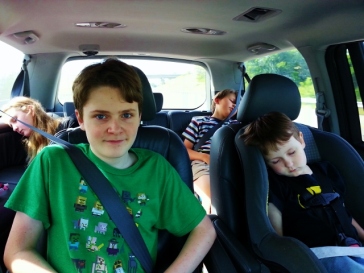 nap time for most of the crew

Middle Boy participated in his first recital this year. He played The Entertainer and did quite well. He is enjoying his new piano teacher. He is working hard right now on using the metronome and practicing counting. Oldest has the same issues with counting and metronome use as well so both of them are (supposedly) working on their timing. I’m not very knowledgeable on the technical side of music so my husband helps them with their practicing. Oldest really wants an electric guitar…so that is something to save for. I am already anticipating next year’s recital!

This week we are on summer vacation while I make plans for the next school year. We spent one day at the pool. The public pool here is really nice with several slides and various areas for young swimmers. The older three took turns hanging out with Littlest so everyone got a chance to enjoy the facilities. Next time I will take a book or something to work on. I enjoyed the pool too but not like the kids. They could stay from sunup to sundown. We’ll gradually ease ourselves into the school year with only two subjects next week and then add a subject each week until we have everything going again. 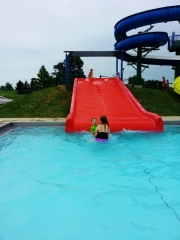 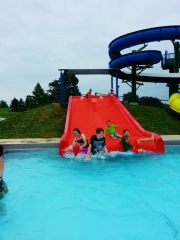 this one is my favorite of the four of them 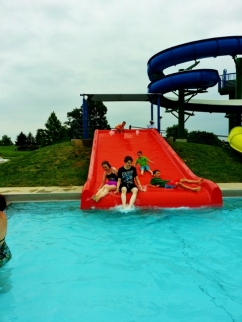 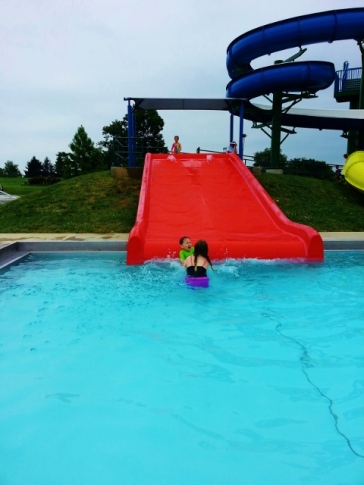 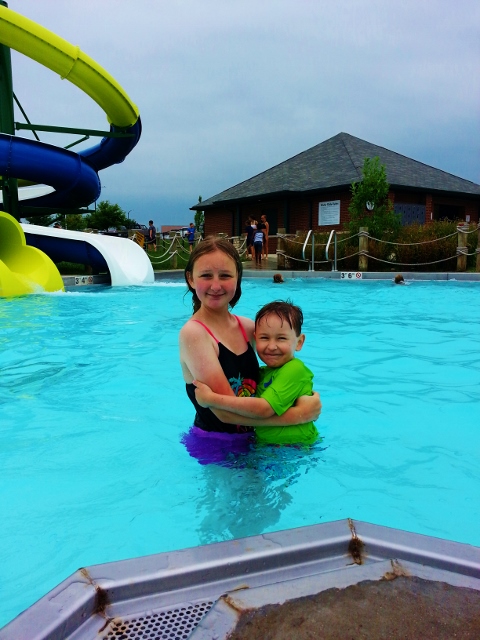 We celebrated the 4th with friends this year. The kids played outside mostly. Sparkles was a little sad since she could not eat most of the food offered. I felt bad for her and will have to come up with some options for her when we are at family and holiday events. My phone was nearly dead so I only got a few pictures of the fireworks and happenings. 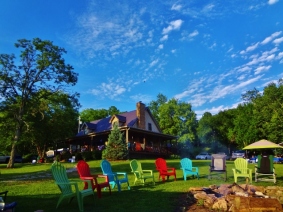 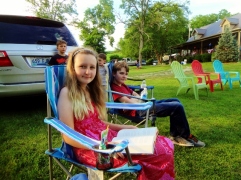 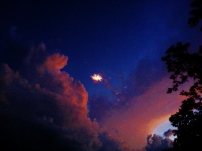